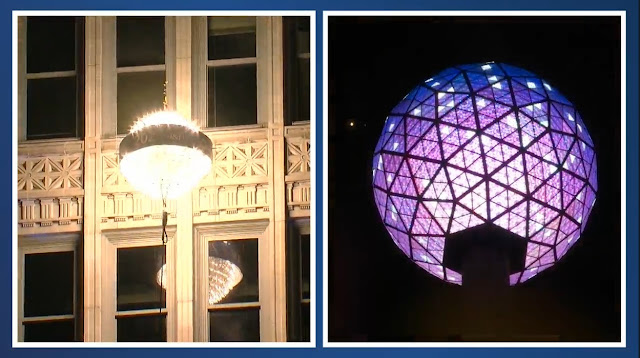 .......................Buffalo, NY.................................New York City
Dare I say that tonight's virtual show was so much better--production wise and content wise--than the previously truncated and rushed versions, occasionally interrupted by a raucous member of the crowd. To be honest, I missed the crowd in New York City, but was too interested in the program to miss the Buffalo crowd. Buffalo's own Goo Goo Dolls brought two special numbers from their most recent album.
Those watching on streaming cable were able to witness the entire multi millionaire drawing which went to the family interviewed before the drawing. They are from Washington D.C. and were all speechless at the announcement! The television broad cast managed to cut the drawing way down which then lacked the drama and excitement of the computer streaming version. I was monitoring both so I could be prepared for photographs. The streaming was about 45 seconds later than the on air broadcast.
WKBW obviously had a much better contract arrangement with ABC than in previous years. Keith Radford, anchor at WKBW for 34 years, announced his retirement this upcoming June, so this was his last New Year's Eve as an anchor. Irv Weinstein also put in 34 years as part of the Eye Witness News Team with Rick Azar (Sports) and Tom Jolls (Weather) which had its beginning in 1964. The station was still "new" then, having opened on November 30, 1958 finally bringing ABC to Buffalo, WNY, and Southern Ontario markets. First to Buffalo was WBEN (WIVB) Channel 4 on May 14, 1948 followed by WGR (WGRZ) Channel 2 on August 14, 1954.
Here's wishing all our Lake residents, friends and acquaintances a Very Happy, Healthy, and Hopeful New Year 2021!