Last lunar eclipse of 2020 to unfold before daybreak on Monday

Just before the last sunrise of November, night owls and early birds will be treated to the final lunar eclipse of the year as the moon passes through part of Earth’s shadow. Weather permitting, all of North America will be able to see the celestial alignment on the night of Sunday, Nov. 29, into the early hours of Monday, Nov. 30. Eager stargazers in South America, Australia and most of Asia will also be able to take in the eclipse, providing the weather cooperates. 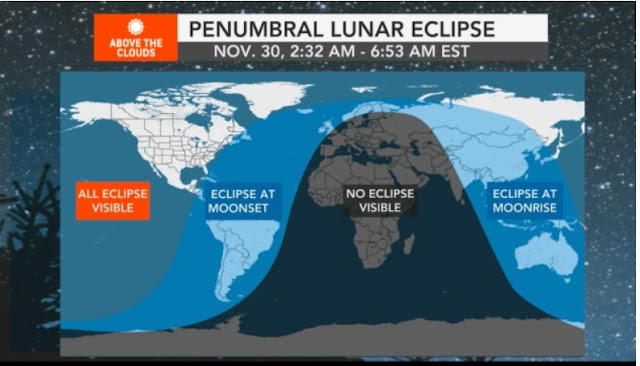 A penumbral lunar eclipse can be underwhelming for those that are expecting a dramatic change in the moon’s appearance like what takes place during the height of a total lunar eclipse. Instead of the entire moon going dark, only the top portion of the moon will appear dimmer than normal.

This slight change can be difficult to spot. People gazing at the moon that are unaware that the eclipse is underway may not even detect the change in brightness. Courtesy of AccuWeather