Forecasters monitoring the potential for a blockbuster storm to take shape

In the days after Thanksgiving, AccuWeather forecasters say there is the potential for a storm to cause widespread travel delays for those traveling home after the long holiday weekend or heading back to work or school across a huge area of the United States.

Different scenarios are being presented at this stage because the exact size and strength of the potential storm is still yet to be determined. But if the storm, which isn't even on weather maps yet, comes together in one extreme circumstance, it could trigger severe weather and wintry conditions across the central and eastern U.S.

The backbone of the potential storm is currently way out in the northern Pacific, which means it will be several days before the storm's true extent will be known. However, meteorologists have been able to project multiple scenarios, including one that shows a blockbuster storm unleashing a slew of weather hazards across the eastern third of the U.S.

How quickly this storm develops and then where it tracks will determine the extent and intensity of rain, thunderstorms, wind and even snow over the eastern third of the nation from Sunday to Tuesday. In an extreme scenario, there may be power outages and risk to lives and property.

Some of the key features were associated with surface disturbances and ripples in the jet stream located way out over the Pacific Ocean on Tuesday and were not expected to reach the West Coast of the U.S. until the end of the week," AccuWeather Meteorologist Jake Sojda said. 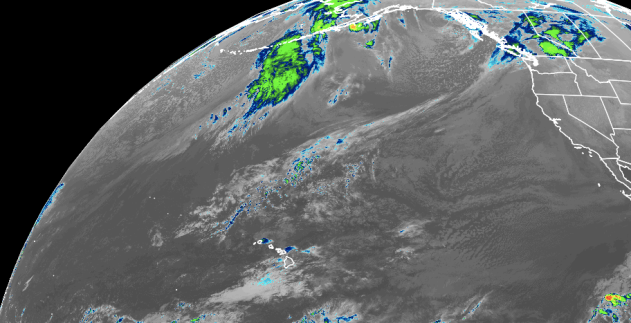 This image, captured on Tuesday, Nov. 24, 2020, shows a portion of the northern Pacific Ocean with severe storms and associated cloud patterns. (CIRA at Colorado State/GOES-East)

Data over the Pacific Ocean is generally limited to ship and buoy reports as well as satellite information. Once a storm moves over North America, it moves into a vast field of data sources which generally help improve weather forecast information.

How these disturbances interact with each other upon moving across the U.S. this weekend into early next week will determine the upcoming storm's intensity and track. There are two primary scenarios for how this storm will unfold. 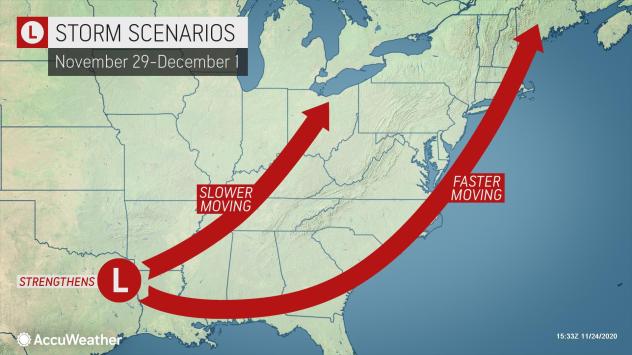 "If the two disturbances join up quickly, then a storm would likely form sooner, strengthen fast and tend to track from the southern Plains or Gulf Coast toward the Great Lakes or Northeast states," Sojda said. 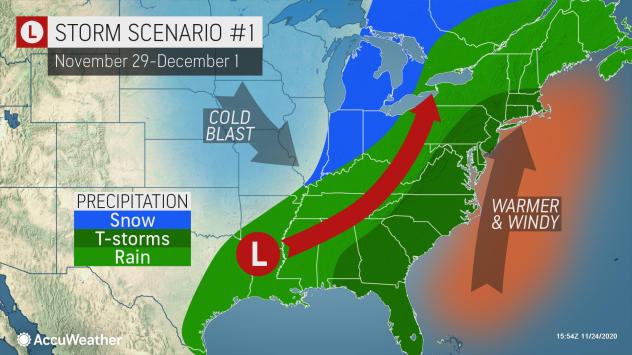 In this first scenario, the storm is likely to move along at a slow pace and heavy rain and gusty winds would tend to affect a broad area of the eastern third of the U.S.

In the more extreme case, a severe weather outbreak might unfold in part of the Southern states and a strip of accumulating snow could even extend from parts of the Tennessee and Ohio valleys to the Great Lakes region. Enough rain may fall on the saturated ground to lead to flooding problems, while winds may be strong enough to knock over trees, trigger power outages and cause turbulence for airline passengers over a broad area of the eastern third of the nation.

There is also the possibility that a big storm fails to take shape with much lesser impacts. 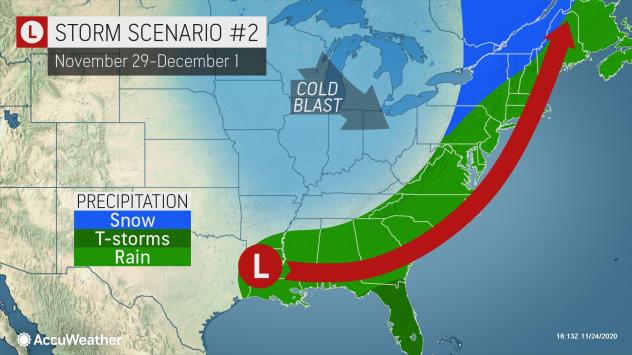 In a scenario where the storms stay separated, rain would be more brief, spotty and lighter in nature. Any thunderstorms that arise may or may not be severe and could be limited to the immediate Gulf Coast or a portion of Florida.

A weaker and faster-moving storm might also have a greater chance of bringing a period of steady snow to the interior Northeast early next week.

Thanksgiving outlook: Will rain or snow hamper holiday plans?Southern US set for a soaking to end the weekPre-Thanksgiving severe storms may threaten central, southern US

In any case, it appears an outbreak of colder air will invade the Central and Eastern states with lake-effect snow from northern Michigan to parts of West Virginia, western Maryland, Pennsylvania and New York state early next week.

The duration and magnitude of the cold air and lake-effect would be somewhat dependent on the intensity of the storm as well. A strong storm would move more slowly and leave more intense cold air in its wake. A weaker storm would move along at a swift pace and the following cold shot would tend to be brief and likely not as intense.

Meteorologists will continue to provide updates on the progress of the storm and its potential outcome in the days ahead on AccuWeather.com.