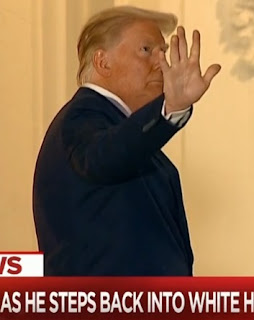 President Trump's visually Triumphal Return to the White House gave us one good message and that was that on the third day of his infection, he left Walter Reed Medical Center on his own power, and was strong enough to climb stairs (in and out of the Marine 1 helicopter) and the long stairs going up to the White House balcony which he usually does not do. The worst message was when he removed his mask right before encountering news reporters, photographers, guards, staffers and other White House personnel immediately inside the W/H doors. 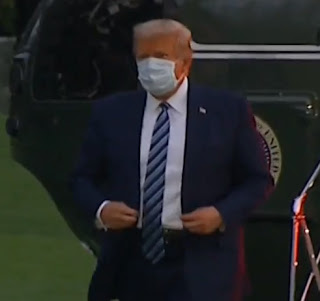 On the right, President Trump exits the Marine 1 helicopter on the south lawn and walks over toward the White House. Part of the staging was to get scenes of Mr. Trump walking steadily, breathing naturally, and climbing stairs effortlessly. 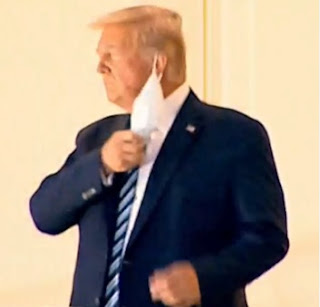 After climbing the outer White House stairs, the President removes his mask, walks into the White House (first photo above) and is immediately surrounded by advisors, photographers, Federal Secret Service agents, and Staff. One medical professional being interviewed said she felt so sorry for the people that the President was breathing upon since he is still highly contagious. The professional called it a very bad example coming right from the top! 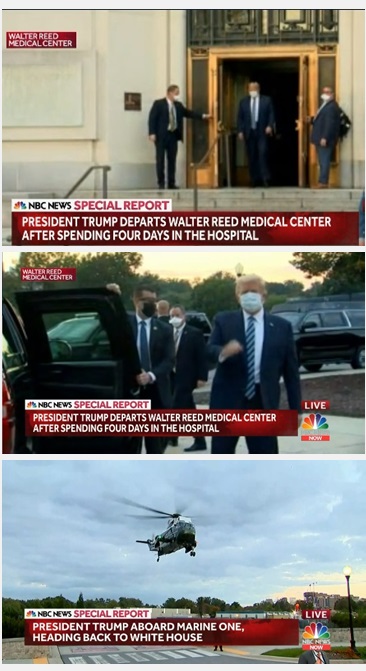