A Brief History of Deadly Flu 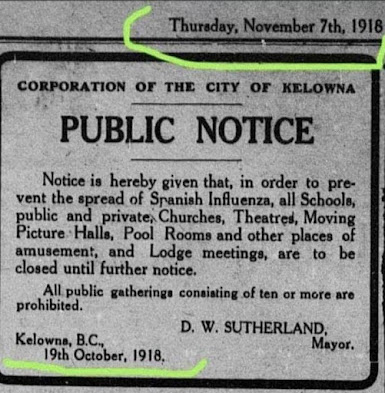 This is not an update of the status of our current pandemic. Rather it is a very brief historical look at flus that have affected us. We need to know that we are not the first Americans to experience a pandemic and will not be the last.

A pandemic is not a "one time" event and periods of illnesses may come in 2 or 3 "waves" anywhere from 3 to 12 months apart. The total duration of a pandemic is likely to be 12 to 18 months. The most recent pandemic, other than the current coronavirus, occurred in 2009 and was caused by an influenza A (H1N1) virus. It is estimated to have caused between 100 000 and 400 000 deaths globally in the first year alone.

1918 INFLUENZA PANDEMIC -- While it's unlikely that the “Spanish Flu” originated in Spain, scientists are still unsure of its source. France, China and Britain have all been suggested as the potential birthplace of the virus, as has the United States, where the first known case was reported at a military base in Kansas on March 11, 1918. There is no evidence to the conspiracy theory that the flu arrived in a German submarine off of the U.S. Atlantic coast.

At least 50 million people were killed around the world including an estimated 675,000 Americans. In fact, the 1918 pandemic actually caused the average life expectancy in the United States to drop by about 12 years for both men and women. Scientists offer several possible explanations for the high mortality rate of the 1918 influenza pandemic. Some analyses have shown the virus to be particularly deadly because it triggers a cytokine storm, which ravages the stronger immune system of young adults. Philadelphia was the hardest-hit city in the United States. After the Liberty Loan parade (celebrations to promote government bonds that helped pay for the Allied cause in Europe) on September 28, thousands of people became infected. The 1918 influenza pandemic caused an estimated 50 million to 100 million deaths worldwide.

The virus that caused the 1918 influenza pandemic probably sprang from North American domestic and wild birds, not from the mixing of human and swine viruses. Descendants of the 1918 influenza virus still circulate today, and current seasonal influenza vaccines provide some protection against the 1918 virus. The symptoms of the 1918 flu included the normal flu symptoms of fever, nausea, aches and diarrhea. Many developed severe pneumonia attack. Dark spots would appear on the cheeks and patients would turn blue, suffocating from a lack of oxygen as lungs filled with a frothy, bloody substance. Oct 5, 2005. The influenza epidemic that swept the world in 1918 killed an estimated 50 million people. One fifth of the world's population was attacked by this deadly virus. Within months, it had killed more people than any other illness in recorded history.

THE BLACK PLAGUE -- The plague killed an estimated 25 million people, almost a third of the continent's population. The Black Death lingered on for centuries, particularly in cities. One of the worst plagues in history arrived at Europe's shores in 1347. Five years later, some 25 to 50 million people were dead. Nearly 700 years after the Black Death swept through Europe, it still haunts the world as the worst-case scenario for an epidemic.