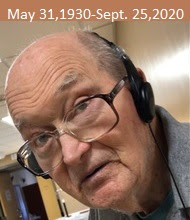 Clarence R. Clark, age 90, previously of Silver Lake, died peacefully, Friday, September 25th 2020 at the Wyoming County Skilled Nursing Facility in Warsaw. Clarence was born in Albion, Michigan, May 31st 1930, a son of the late Ralph and Velma Birtch Clark. Clarence was a Wyoming County resident since 1952 and previously lived in Bath, NY. A 1950 graduate of Haverly High School in Bath, Clarence served our country proudly in the United States Army Medical Corp during the Korean War from 1951 to 1953.

Upon returning from the military, Clarence attended West Virginia Wesleyan College and Pfeiffer University in North Carolina. He worked for a time at Bethlehem Steel in Buffalo, and was an orderly at the VA Hospital, Rochester State Hospital, Wende Correctional, and the Beech-wood Home. Clarence was a member of the Silver Springs United Methodist Church, McKelton American Legion Post #350 in Perry, National Right to Life, New Yorkers for Constitutional Freedoms, Open Doors Mission, and The Liberty Council. Clarence enjoyed working with and supporting “My Brother's House” prison ministries. He was a spiritual man but also could strike up a good political conversation with the best of them. Clarence was preceded in death by his sisters; Phyllis LaChance, Dorothy Clark, Ruth Clark and June Granger. Survivors include a brother; Philip Clark of Greenville, South Carolina, a niece Lisa LaChance of Boca Raton, FL, a nephew; Jeff (Lisa) LaChance of Alabama as well as many dear friends, and cousins. Clarence will be buried in the Bath National Cemetery, with full military honors, at a date to be announced. Weeks Funeral Home 123 N. Main Street Warsaw has arrangements. Please visit www.weeksfuneral.com to offer condolences, send cards or flowers.