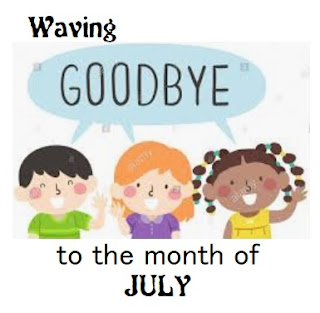 By this point, in the summer of a "normal" year (meaning a year without a worldwide pandemic), the July daily editions of the Silver Lake Daily Newsletter (SLDN), aka The Blog, would have been filled with photos of the concert bands, their members and their music, along with photos and captions regarding visiting authors, artists, and lecturers and the basic content of what they came to share with the Silver Lake Institute (SLI) and their surrounding community guests. Additional SLI community content from July was shared with residents of SLI on their requested "SLI Password Page." Other than that, the SLI season and all its scheduled activities was cancelled and closed. Nevertheless the SLDN aka The Blog, did its best to bring you what news came to our attention along with special features under the title of Weekend Specials.

The Silver Lake Daily Newsletter (SLDN) aka The Blog, would have made a valiant effort to update you on the hard work of the Silver Lake Association and its unique programs for keeping up the quality of the lake waters for all of its community needs including recreation. This of course would have involved reports on what was happening with the runoff from the Silver Lake Basin as it made its way toward the water of the lake and if the results of the various plantings and other ecological diversions were accomplishing their goals and to what extent. Updates on dredgings and lake cleanups would have been included. This summer is benefitting from many past summers of hard work by the SLA, so its season closing has not affected the quality of the Lake waters.

After a relatively slow July, the last week provided two big news stories both of which were Silver Lake community happenings and both of which were the cause of losses to lake community residents. The first was last Friday's excessively large tree limb falling unexpectedly off of the large-based tree and loudly crashing through the owner's garage, not only splitting the garage apart, but crushing it to the point of easily being a complete and total loss. Another limb from off the falling limb crashed through the neighbor's garage roof causing a large hole open to the weather exposing the inside of a completely finished off room. SLDN aka The Bkig posted photos of the destruction within an hour or two of its happening, even before receiving the owner and neighbor's stories. Special thanks to J. Hoffner for her photography and informal interviews.

The second big news story affecting the Lake community was the triple-building fire earlier this week on the West Bank of Silver Lake which totally destroyed two cottages and severely damaged a third. Fighting the three-building fire was made more difficult because of the heat of the day and firefighters having to work in full fire-fighting safety uniforms. 13 volunteer companies were involved, some acting in standby capacities. The cause of the fire was unofficially determined to be a faulty air conditioner in the center cottage of the three. Three photos and story details were made available by evening with special thanks to the BataviaDailyOnline who were present on the scene of the fire. SLDN had published two non-descript photos taken from the east side of the Lake as we worked to gather more information.

Thus endeth an otherwise quiet July.
Posted by G.A.F. at 8:20 AM