Dr. Anthony Fauci, a key member of the White House's coronavirus task force, warned senators Tuesday that states and cities face serious consequences if they open up too quickly, urging states not to reopen until they know they have the capabilities to handle an inevitable uptick in cases once they relax stay-at-home orders.

In a high-profile hearing where witnesses and many lawmakers joined via video conference, Fauci also told a Senate committee on Tuesday it was a "bridge too far" for schools to expect a vaccine or widely available treatment for Covid-19 by the time students return to campuses in the fall, though he expressed optimism a vaccine would be developed in the next year or two.

Fauci, who leads the National Institute of Allergy and Infectious Diseases, was subdued but candid in his testimony about efforts to respond to the coronavirus outbreak and roll-back stay-at-home orders on Tuesday in the Senate's first hearing on the coronavirus outbreak since March. He told the Senate panel he did not have a "confrontational relationship" with President Donald Trump, but Fauci's testimony nevertheless contrasted Trump's increasingly vocal push in recent days for states to re-open businesses.

"My concern that if some areas -- cities, states or what have you -- jump over those various checkpoints and prematurely open up, without having the capability of being able to respond effectively and efficiently, my concern is we will start to see little spikes that might turn into outbreaks," Fauci said in testimony before the Senate Health, Education, Labor and Pensions Committee.

"There is a real risk that you will trigger an outbreak that you may not be able to control, which in fact, paradoxically, will set you back, not only leading to some suffering and death that could be avoided but could even set you back on the road to try to get economic recovery," Fauci later added.

Tuesday's hearing, titled "Covid-19: Safely getting back to work and school," was a strange reminder of the challenges coronavirus poses and the lengths Congress has gone to try to operate with any semblance of normalcy. All four witnesses and committee leaders appeared remotely. Three of the witnesses and the chairman, Sen. Lamar Alexander of Tennessee, weren't present because they're self-isolating or self-quarantining to some degree after contact with individuals who tested positive for coronavirus. 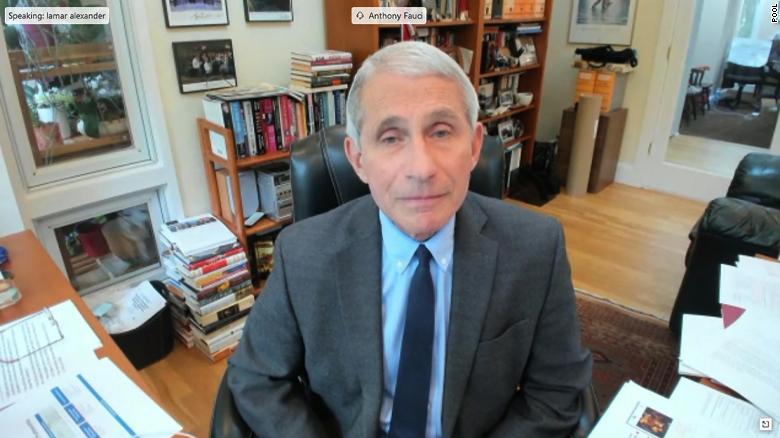 Dr. Anthony Fauci is seen in this screengrab at the start of his testimony Tuesday.

Alexander quarterbacked the hearing via video conference at his cabin in Maryville, Tennessee. His dog, Rufus, could be heard barking in the background while the chairman was speaking and slept on camera for much of the hearing. Inside the mostly empty hearing room, which was closed to the public, some of the senators in attendance were wearing masks, while others were not while sitting at their socially distanced seats below the normal hearing dais.

Fauci and other public health experts, including Centers for Disease Control and Prevention Director Robert Redfield testified Tuesday in what could be one of the only public hearings featuring members of the White House coronavirus task force.

The hearing occurred as states across the country have started taking actions to roll back the business closures and stay-at-home orders put in place two months ago to try to slow the coronavirus infection rate. The testimony and senators' questions often illustrated the divide within the country between Republicans and Democrats over how the administration has handled the crisis and the best path forward amid warnings that positive cases could surge again if restrictions rolled back too quickly.

Democrats pressed Fauci and the officials on the disconnect between the President's comments and the recommendations of public health experts.

"The fact of the matter is, President Trump has been more focused on fighting against the truth, than fighting this virus — and Americans have sadly paid the price," said Washington Sen. Patty Murray, the top Democrat on the committee.

Republicans warn against 'finger-pointing'
Alexander and other Republicans on the panel viewed Tuesday's hearing as a showcase for what the administration has been working on, hoping that the reputations of scientists like Fauci would lend credibility to the work that is occurring. In his opening statement, Alexander urged senators not to engage in "finger-pointing" when the entire world underestimated the virus.
"Before we spend too much time finger-pointing, I'd like to suggest that almost all of us, the United States and almost every country, so far as I can tell, underestimated this virus, underestimated how contagious it would be, underestimated how it could travel silently in people without symptoms to infect other people," Alexander said. 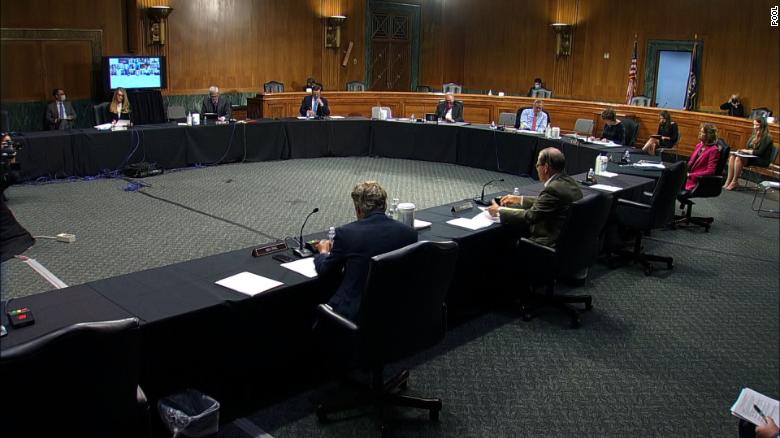 The Senate Committee on Health, Education, Labor and Pensions is in session for the coronvirus hearing on Capitol Hill on Tuesday.

Fauci has become one of the Trump administration's leading -- and most credible -- voices during the pandemic on the White House's coronavirus task force, willing to break with Trump on issues like testing and rolling back stay-at-home orders.

But there's been a backlash to the public health experts like Fauci urging states to keep businesses closed until the number of cases declines further.

Sen. Rand Paul, a Kentucky Republican who tested positive for coronavirus in March, challenged Fauci and other public health experts Tuesday, arguing that the virus has been on a "relatively benign course" outside of high infection rates in New England. He warned that there would be an even greater damage to the country if schools did not re-open in the fall.

"As much as I respect you, Dr. Fauci, I don't think you're the end-all," Paul said. "I don't think you're the one person that gets to make a decision. We can listen to your advice, but there are people on the other side saying there's not going to be a surge and that we can safely open the economy. And the facts will bear this out."

Fauci responded that he "never made myself out to be the end-all." He said he was humble about the effects of Covid-19, given all that is still unknown about the virus, and warned the country should be "very careful, particularly with children." 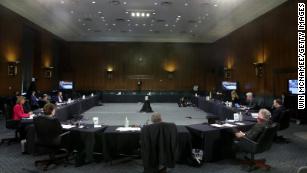 "I think we better be careful if we are not cavalier in thinking that children are completely immune to the deleterious effects," Fauci said.
The issues surrounding children and schools was a topic that was repeatedly raised during Tuesday's hearing, with questions still swirling about how schools deal with the virus in the fall.

Fauci acknowledged the problems with students missing school but said he didn't have a good solution to address the issue, suggesting school reopenings could vary by region.

"I don't have an easy answer to that. I just don't," Fauci told Sen. Bill Cassidy, a Louisiana Republican who is a doctor. "We just have to see on a step-by-step basis as we get into the period of time with the fall about reopening the schools, exactly where we will be, and the dynamics of the outbreak."

Senators urge ramp-up in testing
Senators in both parties urged the administration to continue ramping up testing to help states allow businesses and schools to open.

Alexander has been pushing for the Trump administration to increase testing, even while Trump has claimed the US had "prevailed" and was "leading the world" on testing and falsely said any American who wants a test can get a test. Alexander walked the line between the competing claims in his opening statement, saying that the US efforts on testing were "impressive" but more needed to be done.

"All roads back to work and back to school run through testing. And that what our country has done so far on testing is impressive, but not nearly enough," Alexander said.

Sen. Mitt Romney, a Utah Republican, was more blunt in assessing the administration's track record, questioning the administration's touting of conducting more tests than South Korea, noting the US lag in tests earlier this year and South Korea's Covid-19 death toll remaining under 300, compared to more than 80,000 in the US.
"I find our testing record nothing to celebrate whatsoever," Romney said. "The fact is their test numbers are going down, down, down now because they don't have the kind of outbreak now -- ours are going up, up, up because they have to."

In addition to Fauci and Redfield, Food and Drug Administration Commissioner Dr. Stephen Hahn and Adm. Brett Giroir, the Assistant Secretary for Health at the Department of Health and Human Services, testified at Tuesday's hearing.

Giroir told the committee that since March 12, the country has performed more than 9 million Covid-19 tests, while noting it would still take a few more months to ramp up production further. Giroir predicted the US will be able to produce, distribute and apply "at least 40 to 50 million tests per month" by September, if states need that many tests.

The public health experts were pressed on a number of additional topics at the wide-ranging hearing. Sen. Chris Murphy, a Connecticut Democrat, pressed Redfield on reports that the White House shelved CDC's detailed re-opening recommendations. Redfield responded they would be released "soon." 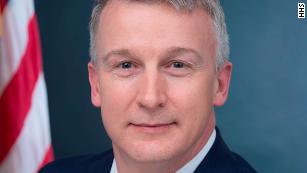 Federal agency says removal of vaccine chief may have been retaliation

In addition to testing, Redfield acknowledged the challenges the US faces with contact tracing and the surveillance system used to track and analyze data around Covid-19 cases, saying it was "archaic." Redfield said the system was "one of the many shortcomings that had been identified" as the pandemic hit.

"It's time to get that corrected," he said.

Redfield was also asked about deaths and cases of coronavirus in nursing homes, which he called "one of the great tragedies that we've all experienced together."

Fauci was asked whether the overall coronavirus death toll was accurate. "The number is likely higher," Fauci responded. "I don't know exactly what percent higher -- but almost certainly it's higher."

And he was quizzed on his views on whether a vaccine was possible within a year or two. "It's definitely not a longshot," Fauci said. "I would think it's more likely than not that we will."

White House could limit future hearings
The hearing could be one of Democrats' only chances to question Fauci and other senior officials after the White House has said they would make limited exceptions to a policy that officials on the White House's task force should be spending their time combating coronavirus, not testifying before Congress.

Asked last week why he wouldn't allow Fauci to testify before the House Appropriations Committee, Trump said: "Because the House is a setup. The House is a bunch of Trump haters."          Courtesy of CNN
Posted by G.A.F. at 5:34 PM