States where the virus is
spreading fastest right now 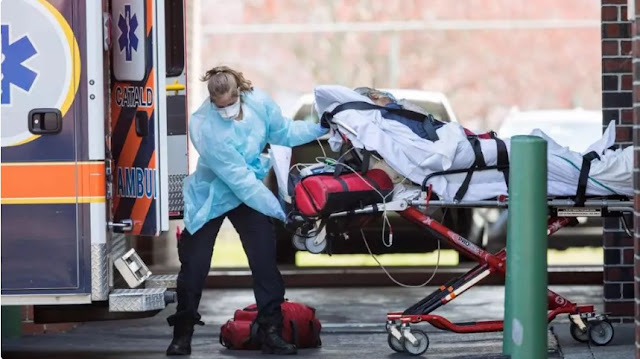 As of Wednesday, April 23, more than 850,000 COVID-19 cases have been confirmed in the U.S., by far the most of any country. The virus has quickly become the nation's most common cause of death. In the last week, at least 20,000 people in the U.S. died from COVID-19, more than the average weekly deaths from cancer, heart disease or car crashes.

The virus has quickly become the nation's most common cause of death. In the last week, at least 20,000 people in the U.S. died from COVID-19, more than the average weekly deaths from cancer, heart disease or car crashes. Within the United States, the virus has spread rapidly amid a lack of wide-scale testing and varying levels of statewide social distancing measures. So far, fewer than 3.2 million COVID-19 tests have been administered, or 10 for every 1,000 people nationwide.


In an interview with 24/7 Wall St., Mark Seidner, associate professor of infectious diseases at Harvard University and clinician at Massachusetts General Hospital, explained that with no vaccine and no effective treatment options, "social distancing is the only intervention we have currently to stop the epidemic."


How effective is social distancing?


In the study, "Social Distancing to Slow the U.S. COVID-19 Epidemic: Interrupted Time-Series Analysis," a preprint of a non-peer reviewed study published by Harvard infectious disease experts on April 8, statewide social distancing measures were associated with a decrease in U.S. COVID-19 growth.

"Based on the size of the epidemic at the time of implementation in each state, social distancing measures were associated with a decrease of 3,090 cases at 7 days, and 68,255 cases at 14 days, after implementation," wrote the study's researchers. Of the eight states with no statewide stay-at-home orders, five are among the 10 states where the virus spread the fastest over the last seven days. (Here are every state's rules for staying at home and social distancing.)

According to Seidner, how well a state is testing for the virus and how effectively it is interrupting transmission of the virus by implementing social distancing are the two major factors determining the size and spread of a state's COVID-19 outbreak. These two aspects of the response also heavily depend on one another. "Social distancing relies on testing to be effective because if you don't know the rate at which the epidemic is growing or hopefully slowing, [then] you don't know when to relax it [and] you don't know when to institute it."

How effectively are states testing for COVID-19?
The states testing larger shares of their populations are reporting higher confirmed cases per resident. All five of the states with the most COVID-19 cases per capita have testing rates considerably higher than the nationwide average of 989 tests per 100,000 people.

Seidner noted that high testing rates and high confirmed cases feed one another. "The more testing you do the more cases you're going to find, but you're also much more likely to expand testing in areas you think are hot spots." (These are the states with the highest number of COVID cases.)

Seidner explained that while U.S. preparedness for the outbreak could have been much better, the wide-scale testing that is so critical to a proper epidemic response is a massive undertaking. From escalating production of testing supplies (swabs, tubes, and fluid to preserve the virus, and platforms to run the tests) to hiring extra medical staff needed to administer and process the tests to managing the retesting required in contact tracing, "you're really asking the diagnostic community to go from zero to millions in a week or two."

Population density appears to be a major
factor in the spread of the virus.
Seven of the nation's most crowded states, including New Jersey with a nation-leading density of 1,021 people per square mile, are among the 10 states with the most confirmed COVID-19 cases per capita. The states with the lowest cases per capita tend to be more sparsely populated.

More recently, the growth in the numbers of confirmed cases has started to spike in some states while it has started to slow in others. In the past week, the number of cases grew by 75.1% in one state, while the seven-day percent change was as low as 5.8% growth in another.

To determine the states where the virus is growing the fastest right now, 24/7 Wall St. compiled and reviewed confirmed COVID-19 cases and deaths for the seven days through April 23 from state and local health departments. States were ranked on the percent change from total cases on April 16 to total cases on April 23.