Generally dry weather will hold around the eastern Great Lakes, central Appalachians and lower mid-Atlantic region during the first couple of days of April, aside from spotty pop-up showers during the afternoon hours.


Prior to the warmup across the Northeast, a storm system that recently brought showers and thunderstorms to the Southeast states has moved out to sea and is forecast to strengthen and may boomerang toward New England for a time from Thursday to Friday. The storm is expected to evolve into a nor'easter.

While an offshore storm will cause trouble in New England into the end of the week, a shift in the weather pattern will bring warmer, drier conditions to the East Coast just in time for the weekend. 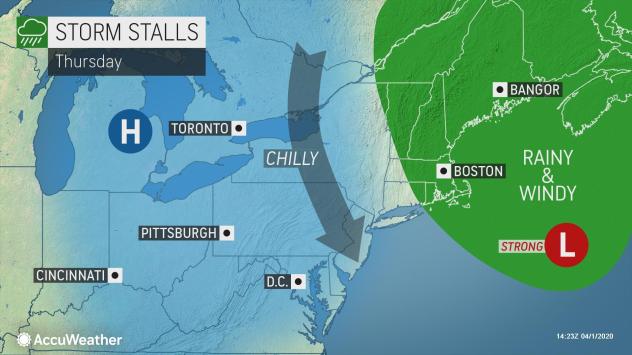 Meanwhile, the strengthening storm over the Atlantic Ocean will cause chilly air to dig into New England and allow winds to increase along the coast. Rain is also forecast to pivot in from the east on Thursday before retreating back out to sea on Friday.
.