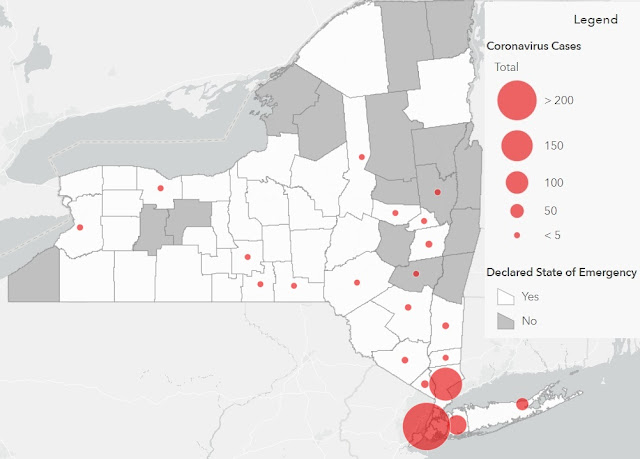 States of emergency due to COVID-19 were declared Saturday in Genesee, Orleans and Wyoming counties. All schools in the three counties also will be closed, beginning Monday. Orleans County was the first to issue an emergency declaration. County Legislature chairwoman Lynne Johnson also recommended that all schools be closed. Their closing was announced shortly afterward.
Genesee County Legislature chairwoman Rochelle Stein followed suit Saturday night. Stein’s statement also included an announcement from Kevin MacDonald, district superintendent for the Genesee County Educational Partnership, that all 22 school districts in Genesee, Wyoming, Livingston and Steuben counties will close until further notice, beginning Monday, affecting 24,000 students
Jerry L. Davis, chairman of the Wyoming County Board of Supervisors, said Saturday night the state of emergency in his county would go into effect at midnight and remain in force for 30 days unless rescinded or renewed.
Posted by G.A.F. at 10:08 PM