Woman in SUV Killed in a Rt. 39 at East Lake Rd. Crash between Tractor Trailer and SUV, 2 children reportedly not hurt 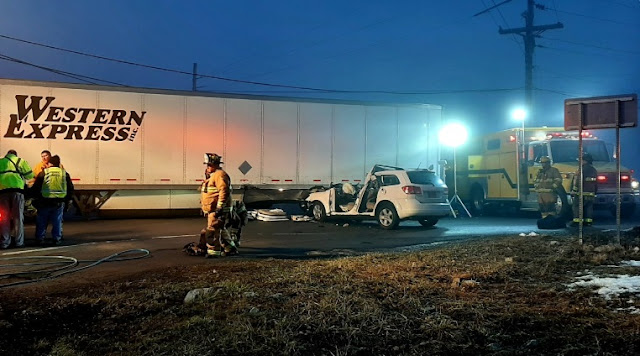 Photo Courtesy of WKBW Buffalo
Dense fog is believed to be a significant factor in a fatal accident Tuesday afternoon at Route 39 and East Lake Road, Wyoming County sheriff’s deputies said. The accident was reported about 4:30 p.m. It involved a car and tractor-trailer.
One adult woman in the car was killed and two children were injured. The tractor-trailer driver escaped injury. The cause of the crash is still under investigation by the Sheriff’s Office Crash Management Team. Route 39 was closed for several hours Tuesday evening.
Firefighters and rescue personnel from Perry, Castile, Silver Springs, Gainesville, Pike, Monroe Ambulance and Perry Ambulance responded, along with county Emergency Management personnel and the county coroner’s office.

Compilation of several news sources
Posted by G.A.F. at 10:14 PM