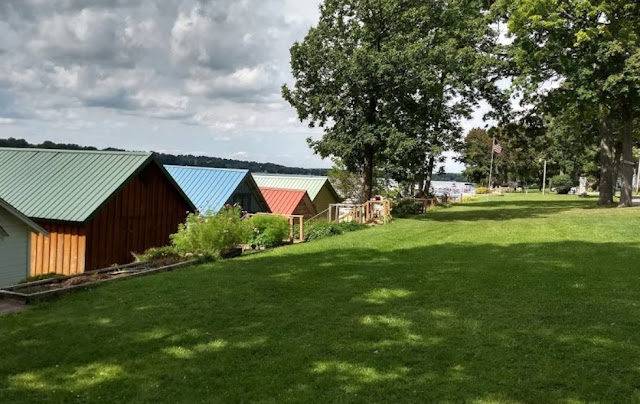 The Silver Lake Institute Greenway is a beautiful and relaxing interlude of colorful mowed lawn between the homes and cottages of the western and northwestern section of the Institute and the silvery Lake to its west. It is located between Lakeview Ave. and the eastern shore, running the full length of Lakeview. The Greenway contains both sun and shade and has been beautifully separated into two sections--one north of the relatively new Heritage Walkway, and one south of the memorial brick walkway. The view above is from the south end looking northward, and if you look carefully, you can see the tall American Flag in the center of the flag garden, the light pole to its right, and the archway just a few steps west of Lakeview Ave. to the right of the light pole.

For many years, this area was owned by the various companies operating the railroad spur between Silver Springs and Perry. It appeared much more industrial and somewhat unkempt with a line of swamps and cat tails created by water running down the hill and getting trapped on the east side of the railroad tracks which didn't allow for its efficient draining. There was more mud and gravel than lawn. The railroad served the Silver Lake Institute and Assembly for 102 years before they pulled up the tracks and sold the land. The day of the individual automotive vehicle had arrived. The dream of the Silver Lake Institute was exactly the opposite of that previously represented by a rail yard and station.

Today, we are the beneficiaries of this unique green gem--a beauty which we have enjoyed for the past 45 years in all its natural wonder. It is thoroughly enjoyed by so many of the SLI residents and neighbors in the current generation. We, and the generations to come, hope to enjoy it for another 102 years and more!
Posted by G.A.F. at 9:40 PM