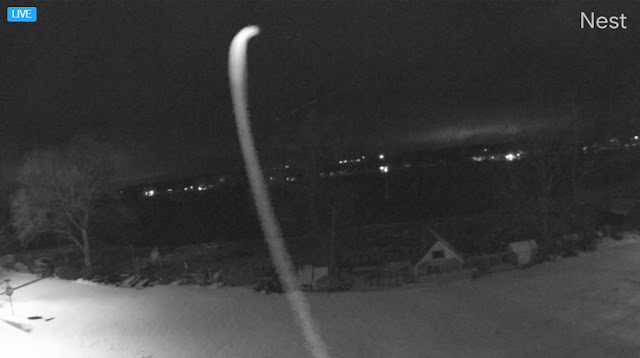 This is a photo of the east shore of Silver Lake at 11:45 pm New Year's Eve. The wind was blowing and an occasional snow flurry like the one in the photo went zipping by about two per second.

For those who still long for Guy Lombardo's Old Lang Syne, click on the arrow and enjoy his 1953 recording:

The band's tag was "The Most Beautiful Music this Side of Heaven." The following is billed as the last New Year's performance by Guy Lombardo and the Royal Canadians (1976-1977):

On November 5, 1977, Lombardo died of a fatal heart attack. Another source says he died "of a lung ailment." His wife was at his bedside when he died in Houston Methodist Hospital.

Dick Clark hosted New Year's Rockin' Eve annually from 1973 through 1999 and from 2001 through 2004. For the year 2000, Peter Jennings for ABC News's ABC 2000 Today broadcast. In December 2004, Clark suffered from a stroke, which resulted in Regis Philbin serving as guest host. Due to lingering speech impediments from the stroke, Clark ceded hosting duties to Ryan Seacrest the following year, but continued to make limited appearances as a co-host until his death in 2012 (despite his death, his name still remains on the program to this day). Hosting solo since the 2012–13 edition, Seacrest has most recently been joined by Jenny McCarthy as a correspondent from Times Square (succeeded by Lucy Hale, who had been hosting location segments from New Orleans since the 2015–16 broadcast, for the 2019–20 edition), with Ciara serving as the presenter of the Hollywood concert segments. Through its deal with Dick Clark Productions, New Year's Rockin' Eve will remain on ABC through at least 2024.
Posted by G.A.F. at 12:30 AM