After initial 4 to 5", Silver Lake Missed late Evening and Overnight Snowfalls; Currently Avoiding 6 am to 7 am Snow

UPDATE --- Approximately 9 am, we received a snow squall which lasted approximately 90 minutes or less, after which it cleared again and remained clear for the rest of the morning and afternoon. It is 4:22 pm at the time of this report and there has been no new snow.

As is quite often the case, Silver Lake has been able to avoid significant, additional snowfall from about 9 pm last evening up to the present. The forecast of heavy snow from 6 am to 7 am this morning seems also to be avoiding us. The 32-degree temperature has the snow wet and heavy and slowly trying to slide off the windows of my car with only limited success.

The current radar picture is indicating some level of snowfall on our doorstep but it keeps breaking up somewhere between Warsaw and Silver Lake, although we haven't received any live reports from the southern Silver Lake area up to this point. 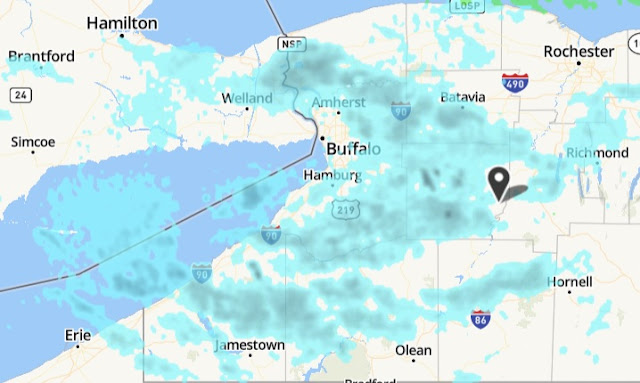 The Winter Storm Warning has expired (at 7 am) as previously forecast. Snow does, however, remain in the mid-morning forecast. Snow should end for most areas by late morning just in time for Asbury's Christmas Brunch at 11:30 am.
Posted by G.A.F. at 6:57 AM