Returning from an early afternoon doctor's appointment, I discovered the Electric company's massive tree trimming and removal bucket truck situated at a 45 degree angle on my side lot removing all the branches from a tree situated very close to the power pole where the electric wires traveled to several cottages in the immediate area, one of which is currently unoccupied. By the time their work day was over, they had also brought down the entire tree which was clearly black and moldy on the inside of the bottom section. Hopefully they will return to remove the pieces and parts of all that they brought down.

Because their huge truck was parked where I usually park, I pulled into Hoffner's back lot and parked. That's when I observed a very large branch mostly down but not fully touching the ground. The heavy branch was being held about 18 inches above the ground by electrical wires from a different utility pole which appeared to be going to the second cottage on Ames Ave. which is, I believe, not occupied at this time of year. While the tree branch and wires were laying close to Hunters' cottage, it appeared that the wires to their cottage were unaffected.

I reported the downed tree branch and wires to the SLI groundsman who stopped by to check on the work being done, and he immediately reported it to the men at the bucket truck who said they would take care of it. My phone wire was also down, but it is currently not in use. (I have a cable phone.) All in an afternoon's observations.      --G.A.F.

UPDATE: I noted the groundsman's truck at the end of the street Thursday at 7:30 am and when I went to move my car, I noticed that the tension which the large branch was creating on the wires had been relieved and the wires were free from the branch and hanging at least twice as high as they had been before. 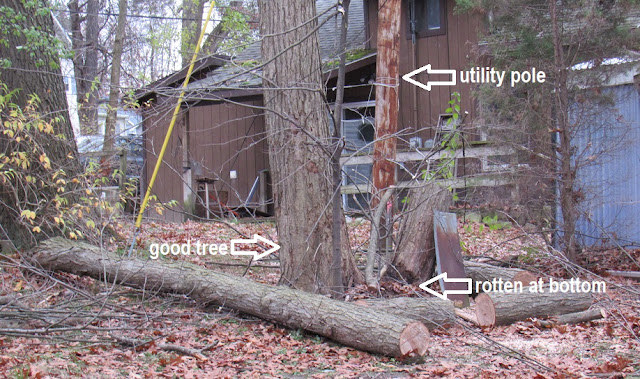 Tree, rotten at ground level, was taken down Wednesday.