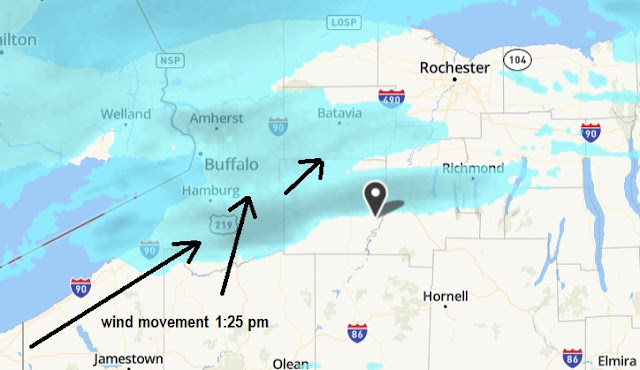 From morning up to about 1:30 pm Monday, winds were coming across Lake Erie in a northeasterly direction. When the lake effect snow got over land, it appeared that some dry wind from the south (Allegany and Chautauqua counties) pushed the snow clouds almost due north before resuming a northeasterly direction. This created bands of snow that were intermittently touching the Silver Lake basin. It is coming up to 2 pm and since 1:30 pm, all snow has been missing the eastern shore of Silver Lake.

As the afternoon progresses, the lake effect will involve all of Lake Erie and the wind direction will be mostly easterly but also some north-easterly causing it to cover most of Western New York.
Posted by G.A.F. at 1:44 PM