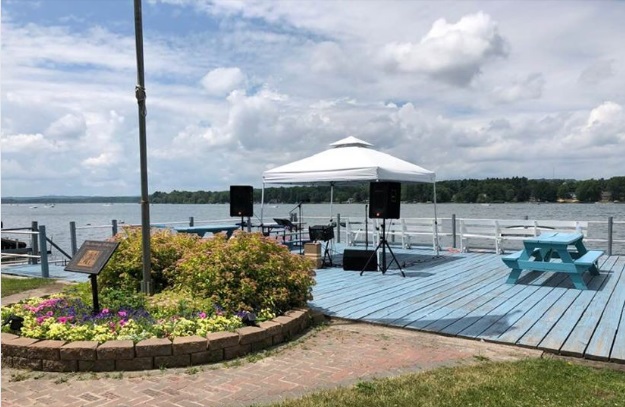 Shown above is the Big Blue Dock one-half hour before the 2 pm concert was slated to begin. It was being called the perfect day for the concert.

MoJo Chunk has proven that they are as flexible as the reputation that precedes them. Just about 15 minutes into their on-the-dock 4th of July Concert, the skies opened and dumped a torrent of rain down upon them and their disappointed audience. The end of the rain came, and so did MoJo Chunck as they "came" back to the "stage" which doubles as SLI's Big Blue Dock.

Unfortunately only a few of their enthusiastic audience returned and it wasn't long before more threatening skies and a mostly non-existent audience caused the band to cancel. We need to be perfectly clear, the band was drowned out NOT by dissatisfaction, but literally drowned out by water. Outdoor concerts are usually so gratifying, but the open skies are unpredictable.
Posted by G.A.F. at 6:14 PM