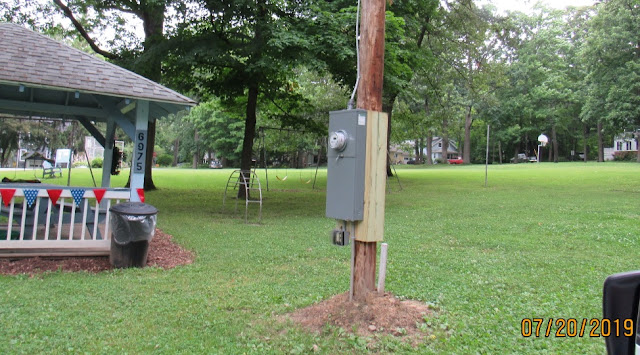 Through the persistent efforts of the Program, Worship, and Experience Committees, the Trustee Board approved a low bid contract with Beardsley Electrical for electricity to be re-installed from scratch in Bishop Burt Park in 2019 and this past week it "was, and is, and ever more shall be." Actually, Beardley's part of the work was completed several weeks ago, it was NYSEG which we were waiting on to complete the hookup to the grid.

All three committees and a number of "worker bees" had been dreaming of things that could be to enhance Burt Park, in the center of the SLI community, and give it even more usefulness. Ideas such as occasional outdoor concerts; occasional outdoor Worship Services; and the Silver Lake Experience needed more workshop space in addition to their need of a great outdoor location for their "World Safari" (S19) by the Buffalo Zoo Education Department.

The first building to be built on the grounds of the Silver Lake Institute (then Camp Wesley) was the amphitheater also known as the auditorium which was located in what was then called "Auditorium Park." It was first used in 1888 and began without electrical power, but the dream existed because many ssmall villages were purchasing electrical generators which the Institute also did about a decade later. So the Park had electrical power at the auditorium for approximately 18-20 years before the regrettable arson fire of the auditorium when power was lost to the Park in 1918.
Posted by G.A.F. at 2:12 PM