We had a beautiful shot of the red line separation but was unable to draw it up when we were ready to post it. 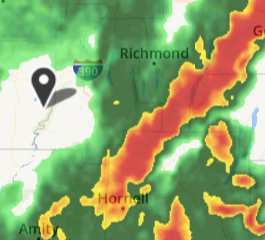 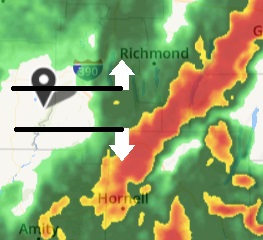 The red line of severe T-Storms in the LEFT photo shows what the line of storms looked like well after it had passed Silver Lake. The very same line appeared to the LEFT (west) of Silver Lake as it moved to pass directly over the Silver Lake Basin.

This explains why after the initial heavy winds and heavy rain, the next wave of severe storms did not appear--only the very dark clouds. Silver Lake often does not receive forecast rain or storms that seem to be headed our way but ultimately do not land in the basin area. It must be the diversity of air pressure created by the high hills in the area, such as Rt. 20A, and the low valleys relatively close to the hills such as the Warsaw valley and the unofficial Silver Lake valley (low area).
Posted by G.A.F. at 9:18 PM