No Precipitation Today or Tomorrow for WNY, but Bad Weather Continues all Around WNY Area

Buffalo and its traditional snow belts to the south are usually the discussion point of our local weather but this time, it appears that Buffalo and its snow belts will miss all significant precipitation with only the possibility of occasional snow flurries with no accumulation. This reverse in traditional weather patterns is, perhaps, part of the reason for this conflicted weather graphic posted for our area, shown below to the right. 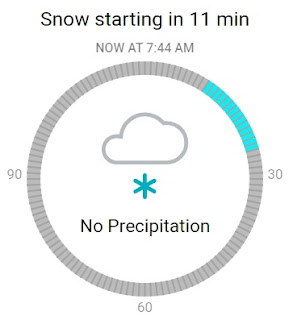 This graphic not only shows a graphic snow flurry but boldly proclaims in its top printed line "Snow starting in 11 minutes." That time has come and gone with no snow. In contrast to the forecast snow, note the primary message within the circle: "No Precipitation."  That's one for the books--snow with no precipitation! Luckily, it appears this phenomenon is given under a 30% chance--although there is no percentage sign (%) to insure that's what the "30" is all about.
Update: There was no snow today in SE Wyoming County.
Posted by G.A.F. at 8:19 AM