Editor -- We ran this historical photo last March (2018) and received a wonderful response from Jack Small who identified, by name, some of the folks in the 1957 photo. Now, almost one year later we have received a second, equally wonderful, response from Joanne Brocklehurst who goes on to identify others in the photo with some other observations. Note that the period dress in the photo is not that of 1957, but that of the Camp Wesley (SLI), Pioneer Museum, and Walker Road Entertainment Section's beginning years, starting 1872 /1873. The building pictured below was requested by the W.C.T.U. after they were burned out of their location on the Pioneer Museum grounds in 1895 by visitors to the Walker Road Properties where individual property owners owned and ran their own games on their private properties. Click on "Read More" below to read both the old and latest information submitted. 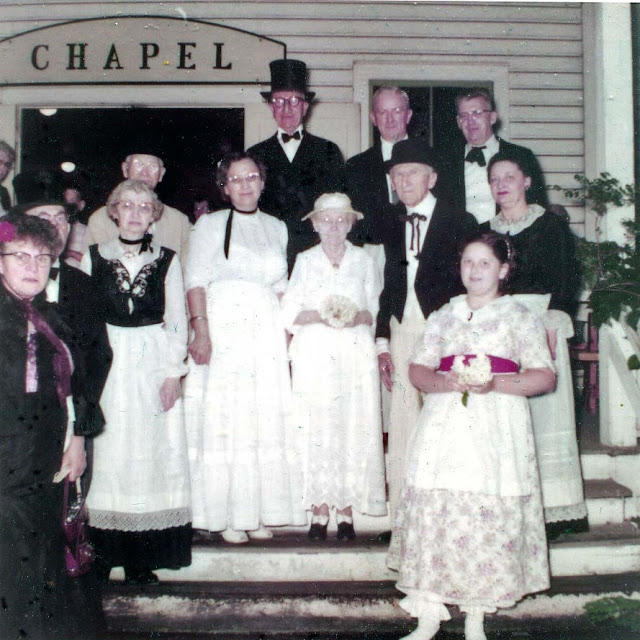 Publisher, March 5, 2018, in consultation with Nancy Sellar -- In an historical article titled, "S/L Assembly and W.C.T.U. Worked Hand-in-Hand in Temperance Training..." raises a question in the comment section at the close of the article. Nancy Sellar wants to know, as do I, if we know the date that the W.C.T.U. building became Stoody Chapel? My research had only revealed that the W.C.T.U. lasted into the 1950s, though at a vastly reduced presence. The photo above, shows us that it was "Stoody Chapel" by 1957 and raises the question of whether or not the occasion for the period dress worn by those in this photo was the occasion for officially declaring the W.C.T.U. building as Stoody Chapel? By extension, the next logical question is about the date the Chapel became the John Stoody Memorial Hall?

Jack Small --March 5, 2018 at 11:14 PM
I am intrigued by the new picture just posted from 1957. The lady in the front row with the flower in her hair was Kitty Stackhouse, and her husband, Rev Willis Stackhouse I believe was in the left side back row. They lived in the house directly south of Doug & Nancy Wilson's. Kitty was a beloved figure in the institute, & quite a character. She is the only person who would drive across the legal road but really a dirt path from their home across the back of our property and down another road on the map only beside our cottage, It used to drive my father crazy (she was not a slow driver!). The lady in the 2nd row with the white dress and dark vest was Ruth Booth. Ruth lived with Walter Ward & his wife at Janes & Genesee. She was the housekeeper but had some relationship to Mrs Ward, possibly sister or cousin. She did a lot of secretarial work for the institute. And in accordance with our conversation last week, I remember when my older son was little, I asked Ruth if I could show him the playhouse. She graciously got the keys and gave Jeff a tour. She outlived both Wards, and lived there alone for a few years. She too was a dear lady. The lady next to her was Gladys Dailey. Gladys was a soloist at Epworth for years, and was our next door neighbor for years in that run down place that is right next to Chapman, but really back from Janes. The elderly lady next to her looks familiar, but I can't put a name to her. I have sent an email to Nancy Sellar for her interpretation of this. The girl at the end of the first row - I wonder if it could possibly be Joanne Brocklehurst. She is younger than me, & I was 18 in 1957. Her mother, Edith was organist at Epworth, so it could be her.


Hi Greg. I was scrolling the blog and came across the 1957 photo. Mr. Small named people in it, but not all of  them.

I am the little girl in front, age 11. My mother was organist at Epworth for a while, but her name is Eleanor. I think Mr. Small confused her with Edith Bergstrom who played for the dock services. The small elderly gentleman behind me is Mr. Fred Fisher, a published poet and retired English professor who had been around the SLI since its earliest days. He remembered helping to plant the giant poplar cottonwood trees some of which still survive. He died well into his 90s.  Next to him the tiny elderly woman is, I think, Margaret Bush’s mother. The man with the light jacket and shiny glasses is James Longley, who with my grandmother’s sister Mabel owned the little white cottage near the end of Janes Ave. Back row, next to Rev. Stackhouse is John Heather, my grandfather, and to his left Wayne Sedgewick. Wayne and Mr. Fisher owned the house at the end of Thompson at Camp Road.
I would appreciate adding this to the note from Mr. Small. I couldn’t figure how to make the comments work or would have done it. I remember this day. We were having some sort of centennial type recognition. My grandfather was pretty active in SLI activities and may have been a Trustee. Old minutes would tell if this were the case.