Despite the radar model, Silver Lake is not forecast to receive any snow today, compared to most other areas to our west and north who have received one-to-two feet of snow, we are willing to say that we have dodged another bullet this week and received no precipitation throughout the period of the multi-day storm. Even the wind which has been responsible for much of the problem in Western New York, also left us alone as we experienced no substantial wind affect from Tuesday to the present.

As Silver Lake approaches Noon today (it is currently 11:34 am), we are experiencing bright sunshine and -mostly blue skies. The temperature is 2°F but the wind chill is closer to -17°F. We have received no precipitation ever since the start of the winter storm on Tuesday. There is a fairly steady breeze which contributes to the bitter cold. Throughout the storm period, one could consistently see the imaginary wall appearing on the radar screen through the center of Wyoming County separating the east of the county from the west, with the east receiving none of what was being forecast for "Wyoming County."

Both the NYS Governor and Lt. Governor have been in WNY since yesterday, mainly chastising tractor-trailer drivers for traveling through the ban on the NYS Thruway, and also urging residents to follow the instructions of their locally elected leaders. Mother Nature has gone out of her way to put on quite a mid-winter show this week including the art work of Jack Frost. Our thanks to "her" for allowing us to enjoy the show without having to participate! 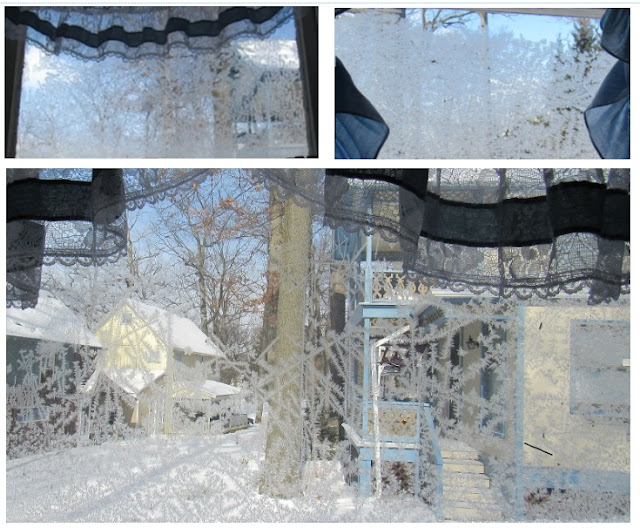 Jack Frost's Art Display on the remaining single glass windows in my porch.
Posted by G.A.F. at 11:48 AM