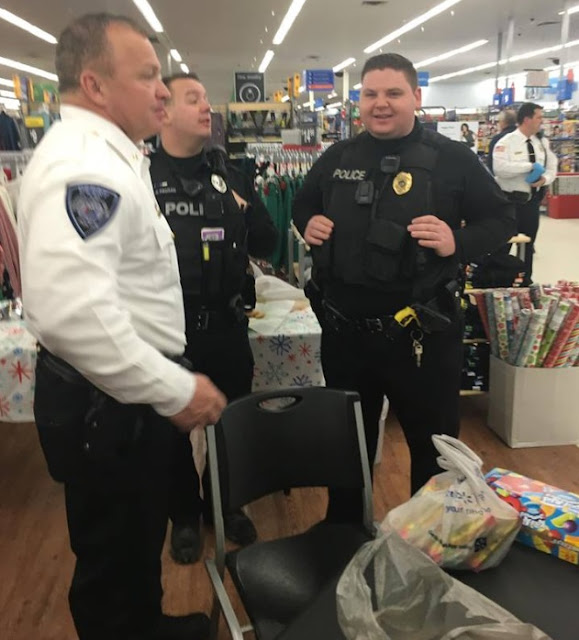 Officer David Spink, Perry PD, Silver Lake Institute resident and pictured on the right, was involved in this year's "Shop with a Cop" program held in Genesee County.


Members of the Batavia Police Department, the Genesee County Sheriff’s Office, and New York State Police Troop A, participated Saturday in the third annual “Shop with a Cop” event at Wal-Mart on Veterans Memorial Drive.
Grant money from Wal-Mart, designated specifically for this event, was distributed equally to all three organizations. The schools within Genesee County assisted in choosing the children. The City of Batavia Police Benevolent Association, Genesee County Deputy Sheriff’s Association, City of Batavia CSEA members, the city’s “Jeans for Friday” program, Department of Public Works (AFSCME) Union, and H.E. Turner & Co., Inc Funeral Home of Batavia & Bergen raised additional funds which enabled 20 extra children to participate. A total of 50 children were invited to participate.
Once at Wal-Mart, the children took photographs with Santa Claus and met with their individual “Cop.” Wal-Mart hosted the event, allocated employees specifically for the event and also donated gift-wrapping materials. Gift wrapping was completed by the Young Adults Group from Batavia City Church, members of the Batavia Police Explorer’s Post and family members from Batavia Police Department and Genesee County Sheriff’s Office.
The Batavia Police Department, Sheriff’s Office and the New York State Police Troop A thank Wal-Mart for its generosity and assistance. (Courtesy Batavia Daily)