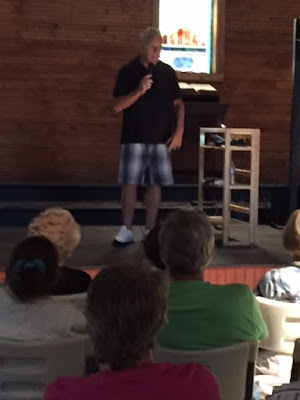 George Miller opened his show on the Epworth Stage with a familiar piece from the Italian opera of the same name. His rendition onf O Sole Mia was superb, as was his closing aria, Nussum Dorma. For those who love famous opera songs were both pleased and disappointed--pleased with the quality of his baritone voice and his magnificent control over it; --disappointed because there was only two opera picks and his classical training made many long for more.

To Dream the Impossible Dream, Somewhere Over the Rainbow and You'll Never Walk Alone are three examples of the Depression-WWII era songs that he presented in quality tones and voice control. He received applause for each and every one of his choices of songs for us.

The last portion of the concert was motivated by his recent stent surgery, having failed his stress test and the discovery of a 90% arterial blockage. He said he was dedicating the last portion of the concert to God, who he felt was responsible for prolonging his life and service. His choices of faith-type songs were sincere and very meaningful as he could be seen wiping away occasional moisture being released from his eyes. He received extended applause and a standing ovation for his inspirational music by several enthusiastic fans.
Posted by G.A.F. at 12:45 AM