Those committee members present at the Long Range Planning Committee's (LRPC) Saturday meeting, read over the sections marked up for review and proofing and then approved their work. Following the final editorial touches by Suzanne Bristow who has done 100% of the re-typing part of the updating job, it was the consensus of the LRPC to forward the first three sections on to the Executive Committee who will eventually bring them to the full Board.

The LRPC agreed that the completing of the committee's part of the Handbook update is a time for which everyone on the committee is longing, and particularly Suzanne who has worked so diligently, long and hard to accomplish this time absorbing project. They agreed that because of the amounts of time and energy required for handbook updates, they reaffirmed the proposed loose-leaf edition which would allow for only new editions, on a regular and ongoing basis, to be inserted, as opposed to rewriting and retyping the whole book.

The second priority is to get the planned garden around the three new memorial signs in Burt Park completed as soon as possible to enable easier lawn mowing and to provide an attractive base drawing further attention and interest in the signs. Contact with persons who may be interested in doing this work will be made.

The third priority is to complete the first phase of the Ames Avenue Walkway. The two white pillars were up for the entire 2018 season and it is the hope that the two signs that designate the walkway can be installed this fall. Location is the current issue and the Silver Lake Connection is in favor of a midway placement between the two white pillars.

The rationale for the midway placement is based on the original intention of closing off both ends of Ames Avenue Walkway to traffic, allowing winter vehicular traffic to total access by way of the two paved roads of Hamline and Haven Avenues. This placement will also allow for the repair of the vehicle ruts on the south end of the walkway and cut back on the further damage which occurred this year. Such placement would greatly enhance the view of the walkway from Perry Ave. and from Epworth Hall.

There is no damage at the north end, but the midway placement of the second sign would help to keep it from being damaged by tire tracks and ruts in the long off season. The following is a photo-shopped reproduction created for the sole purpose of helping folks to picture what the new signs would look like if placed midway between the pillars. It is an unofficial proposal, first and foremost for use by the LRPC committee. Community input is of course welcome. Use one of the following contact means: (1) comment section below; (2) RevGreg@SilverLakeConnection.com. (3) 483-8603. 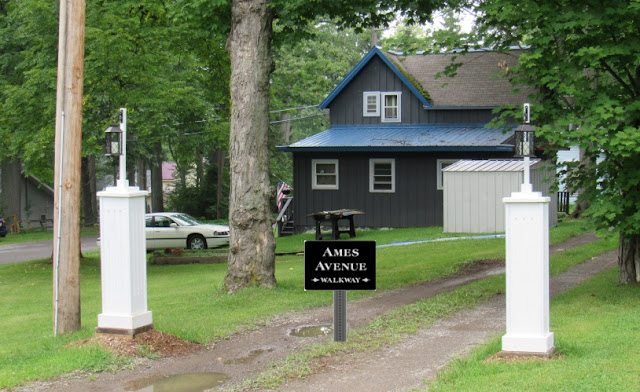 Some of the ruts and mud holes from tire damage are visible here on the south end which is the Epworth Hall end. The goal is to have a smooth, flat, grassy area on which to walk as opposed to the current damage which seems to be getting worse as time progresses.
Posted by G.A.F. at 12:02 AM