March Came in Like a Roaring 'Snow Lion,' Exits as a Docile 'Sunny Lamb'

March not only entered 2018 with a major snow storm, but then continued to "roar" with big snows throughout the month. Relief came no sooner than the closing week of March and relief was hardly noticeable as 24 inches of snow and tall mounds of plowed snow continued to effect our efforts to get around and to find adequate parking spaces.

The last few days were clearly "lamb days" as temperatures alternated between a few freezing temps at night, but the temperatures during the day ranged from the high 30s to the low 50s. This caused a major melt to take place during most of the last week, finally eliminating most snow except for some of the large plowed mounds.

Some may say the month simply can't qualify as a lamb as it exits because of the high wind warning coming into play in the last few hours of the 31st. They of course will have a point, should the winds actually begin at their forecast times before midnight. Overall, however, "mother nature" has done a rather exceptional job of eliminating snow in time for the church and family Easter celebrations of April 1 tomorrow. 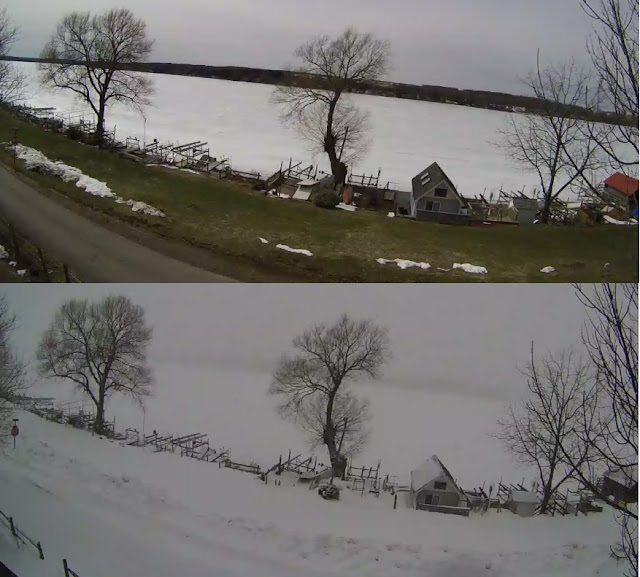 The top cam shot is mid afternoon today, March 31, 2018, with 52 degrees(F) as only remnants of snow mounds remain. The bottom cam shot is mid morning on March 14, 2018 while still in the midst of four Nor'easters and other miscellaneous, un-named snows. Next on the weather agenda is the upcoming colors of the Spring and Summer.

(Photos Courtesy of the Silver Lake Institute)
Posted by G.A.F. at 2:26 PM