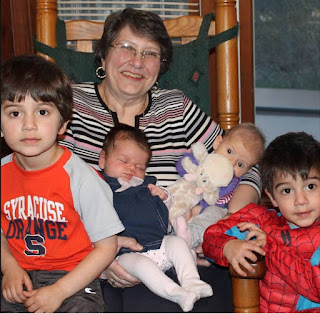 Thursday, August 10, 2017, was the first day of the four-day event known as the Silver Lake Experience. On that day, the Rev. Denise Donato, graduate of CRCDS 01 and founder of Mary Magdalene Church June 17, 2009, served as the Chaplain of the Day at SLE and led a Daily Devotion on "Now is the Time for Universal Compassion." Both she and the Daily Devotion were well received.

Now this beloved pastor who graduated from seminary in 2001 and was ordained a deacon in April, 2002 and was ordained to the priesthood on Feb. 22, 2003, has now been ordained a Bishop in the Ecumenical Catholic Communion (ECC) last month, February 9, 2018. 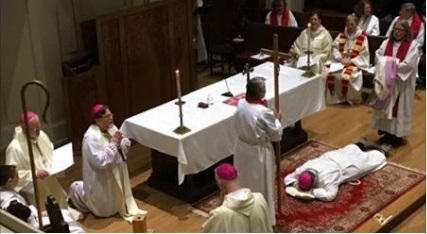 The ordination took place at Rochester's Downtown United Presbyterian Church, which is home to Spiritus Christi's still-thriving parish, reported the National Catholic Reporter (NCR) recently. Donato says that the church still feels like home to her, even though she no longer serves Spiritus Christi as a priest. In 2009, she took a leap of faith and founded a new community called Mary Magdalene Church.
The NCR says that church has grown to 150 members and, in 2015, the community was able to purchase a former Lutheran church property in East Rochester. Though it is a relatively small space, the church has become a community center, hosting teen groups, theater troupes, Alcoholics Anonymous and Narcotics Anonymous meetings, homeless outreach and adult education programs, in addition to its Sunday mass and other liturgies.
"The whole building is alive," says Donato. "You can feel it." 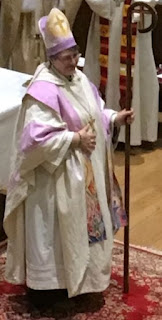 As a bishop, Donato will help to serve the ECC's 51 parishes in the United States. Those parishes comprise the ECC's two dioceses, one in mid-America and the other in California. Each year, several new communities join the ECC, and in the next few years they hope to form one or two more dioceses. Currently, about 95 priests (28 of whom are women) serve ECC communities, as well as 11 deacons and seven bishops.
While most ECC communities have between 20 and 100 members, several of the California-based parishes boast hundreds of members. The largest ECC parishes are its Hispanic communities, led by Bishop Armando Leyva. There are currently more Hispanic members of the ECC than there are non-Hispanic members.

Donato says one of the focuses of her ministry will be to reach out to the Roman Catholic Women Priests community, many of whom she has journeyed with for over 20 years. Their presence was felt at Donato's episcopal ordination, with Bishops Christine Mayr-Lumetzberger and Andrea Johnson sitting among the ECC bishops in the sanctuary and praying over Donato. Donato believes that the many incarnations of the Catholic reform movement are a sign that the Holy Spirit is at work.
"When the Spirit breaks things open, there is not one trajectory, there are many," she says. "Like the apostles, we went out and scattered, and our communities all look different." Donato hopes to work with other women priests to bridge the gaps. "We will have different expressions, but in the end we are all one." She also has a vision of reaching out to Catholics much more broadly, especially women who feel called to ordained ministry.
"We've got to help women who do not know about the ECC or the [Roman Catholic Women Priests], especially those who are in seminaries," says Donato. "There are women who, like me, say, 'I'm Catholic; it's part of me. I don't feel called outside of it. But just as deep in me is the call to ordination.' " As radical as Donato's life might seem from the outside, she insists that she is not a reformer.
"I had to reflect on the question of whether I was called to reform the church or called to minister to the people," says Donato. Like many members of the ECC, Donato believes that if you choose to do ministry first, the ministry will produce its own reform.
"We're living the church we want to see in the world."
Editor's Note: Originally Rev. Denise wanted to be included among the Silver Lake Institute's summer speaker's in 2018, but following her ordination as Bishop, she realized she was not able to make that commitment for this year. As a fellow graduate of CRCDS, I wish to extend warm wishes for a continued dynamic ministry in all that you do. May God continue to bless you with the full measure of God's Holy Spirit for your valuable prophetic work.
Posted by G.A.F. at 12:00 AM